THIS IS A PREORDER ITEM AND WILL BE AVAILABLE EARLY OCTOBER.

A stock CDI will give you a spark, but this CDI will give you a much stronger and more consistent spark which you'll need to back up all those high performance parts you've got on your motor. With its stand-alone coil and a larger base than other CDI's, your CDI receives electricity more efficiently than ever.

You'll definitely need that for racing engines that ask a lot from your 2-stroke's electrical system. This performance CDI is also timed to ensure maximum performance and consistent, correct timing which will ensure a smooth, powerful ride. The bigger and more consistent your spark is, the better your engine will run (especially when it has lots of performance parts). In fact, with this CDI you'll be getting:

Not only will you get better performance, but with its key-switch ignition you get an added bit of safety. No more worrying about someone grabbing your bike, holding in the clutch, pedaling, and stealing your bike. Without the key your CDI won't work, so no one who would want to steal it could.

The BBR Tuning Stage 2 Volt Master High Performance Racing CDI is racer approved and loved by commuters, too. Racers love the performance you get from this CDI, and commuters love the ability to start every time. Not only will this CDI help you get to where you need to go, it'll make sure you get there fast. Whether you're racing around the track or commuting your way to and from work, do yourself a favor a pick up this CDI for your motorized bike.

Original order was missing the key. BikeBerry (bike_deals) rapidly sent a complete new unit at no cost to me. New part works as intended and installation was easy.

Definitely gives it more power even with stock coil. I have the stage 2 80cc engine and it allows it to run better, longer, and cooler. Only down side is, it comes with the blue ring terminal and flag type terminal. For these small wires you need the red ones, and also the sticker doesn’t really stick to the cdi. Also it doesn’t come with any mounting hardware.. I just zip tied mine 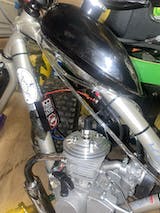