The MotoTec 500W 24V Gazelle is a reliable and high-quality electric dirt Bike for 13+ kids. It is designed by experts with youngster safety in mind to offer a better riding experience overall. Front and rear suspension allow a stable and comfy ride whether you are on rough terrains or the road.  The MotoTec 500W 24V Gazelle is an awesome dirt bike for kids. It is excellent for backyard, driveaway, and dirt racing. This electric bike is much faster as compared to gasoline models. It is ideal for kids of age more than or equal to 13 years. This dirt bike is very easy to assemble.
Dual lithium batteries offer superb performance over longer distances. It can run upto 9 miles per charge. You can even remove your lithium battery and charge it separately from the e-bike. Usually, these batteries need 4 to 6 hours for a full recharge. 24 Volt 500-Watt brushless motor operate cooler than usual. It offers a smooth ride as compared to brushed or petrol-based options.
Standard rear and front suspension enhance safety and traction by ensuring that one or both wheels are in touch with the ground. This makes your ride much comfortable and smoother. In addition, wheels have aluminum rims that offer good traction support.
Knobby pneumatic tires provide more comfort and stability because they allow you to stop more speedily without sliding. Front and rear disc brakes will offer immense stopping power. In addition, it offers much more control in the brake process. This e-bike also has a minimum ground clearance of 9", which helps you avoid the risk of battery flooding.
Twist-grip throttle mode activates the motor by twisting the twist-grip downward. Padded seats are comfortable for a single rider. It helps you satisfy your adventurous side without concerning about bump rides. The manufacturer also provides a 30-days warranty on parts.
Specifications:

For my twin boys 7th birthday all the Grandparents chipped in and bought two of these MotoTec 500W 24V Electric Dirt Bikes plus all their safety gear. These are their first motor bikes and they love them! The speed controls are great. They allowed us to keep them going slower to start, and they were riding solo within minutes. (Caveat - both boys are more advanced bicycle riders for their age). Soon enough we moved up to a faster speed, but the controls added a safety control of doing so.
The bikes were not very difficult to put together - although the instructions could probably be improved. Ultimately assembly was pretty intuitive (and I'm not very mechanically inclined).
The bikes are kept at the nearest Grandparent's house and they have to earn riding time. (working well so far and keeps them still engaged on their regular bicycles, which we was important for us - the parents)
I don't know how normal this will be but the fully charged battery provided ~3-4 hours of life on the lower speeds and still had some battery charge left when I called it a day for the kids (they literally didn't want to stop riding).
I wondered about their age and size for this particular model but decided it was better for growing into them and the bikes lasting longer; the speed control was the ultimate kicker on the decision. The bikes were a little heavier than they are used to, we had them "drag" their feet to start at the really slow speed when starting out to help with balance, and it all worked out. I'm extremely happy with these bikes! TWO BIG THUMBS UP!!!
And Bike Berry was great with customer service, the purchase process, communication and the delivery. 5 star experience all around! 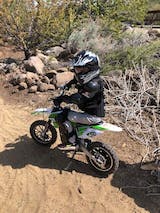 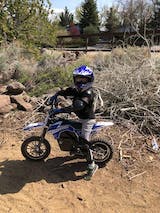 Alot of fun Nice little dirt bike runs well pretty quick . Just make sure before you ride it go over it make sure hardware is tight found loose spark plug and brake levers .

GAHH THAT WAS ICEY I LIKE THAT JOINT I WANT IT SO BAD GIVE ME A BETTER DEAL RATE 4.5